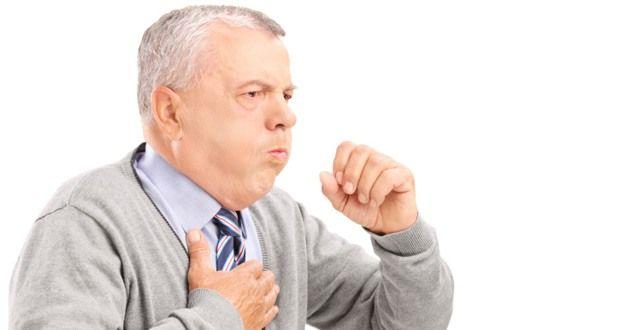 Coughing is a reflex action to try to clear your airways by forcing air up and out of your airways. The airways may be partially blocked by mucus or irritated by smoke, dust or chemicals that you breathe in. Most coughs will clear up within three weeks.

Dry or chesty cough?
A dry cough happens when the throat and upper airways become inflamed. They generally do not produce phlegm. Dry coughs are usually felt in the throat as a tickle that sets off the coughing.
A chesty cough usually produces phlegm. The cough helps to clear the phlegm from your lung passages.

Most coughs are caused by viral infections, such as the common cold and flu.

Smoking is the major cause of COPD and the smoke contains many chemicals that irritate the lining of the lungs causing a ‘smokers cough’.

Some medicines called angiotensin-converting enzyme [ACE]-inhibitors,  used to control high blood pressure and heart failure can cause a persistent cough.

A postnasal drip is where mucus drips down into the back of the throat from the sinuses. This can cause a cough which is often worse when you lie down.

Treatment
Most coughs caused by viral infections will clear up on their own within 2 -3 weeks of the initial infection. If the cough is caused by an underlying condition, this will need specific treatment.

Cough Suppressants eg Pholcodine, Dextromethorphan
These are used for dry coughs only They act centrally on the brain to suppress the cough reflex. They can sometimes cause drowsiness and are not recommended in children under 6 years of age.

Antihistamines eg. Diphenhydramine
These can be of benefit in treating coughs caused by a post-nasal drip by drying up the secretions in the sinuses. Antihistamines can cause drowsiness.

Expectorants eg. Carbocisteine,  Guaifenesin
These are used for chesty coughs. They aid the clearing of mucus from the airways by thinning and liquefying the mucus. Products containing guaifenesin are suitable for children over the age of 6, while carbocisteine can be used from the age of 2.

Honey and lemon is the simplest treatment for a cough. The honey is a demulcent, which means it coats the throat and relieves the irritation that causes coughing. Honey is suitable for use in children over one year.

Quitting smoking
This is the single biggest health improvement that a smoker can do. Sometimes when a person gives up smoking it can make the cough worse for a period of time. This is your body clearing the airways of the excess mucus caused by smoking.

You should see your doctor if you have any of the following symptoms:

A cough for more than three weeks or if your cough is progressively getting worse.

Any difficulty breathing or chest pain.

Antibiotics do not work against most coughs as they only work against bacteria, not the viruses that cause the majority of coughs. Antibiotics are only effective if you develop a secondary bacterial infection such as pneumonia.

Drink plenty of fluids. This will help to thin the mucus secretions and soothe the throat.

Raising your head at night by using an extra pillow can supress the cough reflex and aid a dry cough.

Using a humidifier to moisten the air can help symptoms.

Patients who suffer from a chronic lung condition and/or are over 65 years of age are recommended to get the annual flu vaccine (Ask your totalhealth pharmacist if you are entitled to a free vaccination) and also the pneumococcal vaccine.